Esperanza Conesds remembers the first time she visited Misa Alegría, the Spanish-speaking community at the Church of St. Stephen and the Incarnation in the Columbia Heights neighborhood just off 16th Street Northwest. A friend had invited her, she remembers, and she was apprehensive at first. “But everybody was friendly,” she says. “Everybody was nice.” The music spoke to her of her native country of Guatemala, and it wasn’t long before she was singing in the choir.

Every Sunday after the Eucharist, the people of Misa Alegría gather in the parish hall for dinner and usually some communal singing, and Conesds, a part-time care giver and companion for the elderly who lives in Bladensburg, makes sure she sits at a different table each week.

“I talk with everybody about their life,” she says. “Some people feel discrimination, but they say that at Misa Alegría they feel great because people accept you whatever your race or your country.”

“The community at Misa Alegría has long been a spiritual home for people who felt threatened or marginalized in their lives in the United States,” says the Rev. Sarabeth Goodwin, the diocese’s transitional Latino missioner who was its founding pastor, “but Misa is growing into a confident –proudly Episcopal–congregation.” Nothing symbolizes this new stage in the congregation’s life as vividly as the recent transition of leadership at St. Stephen’s.

In June, Goodwin stepped down as the congregation’s Latino missioner after 10 ½ years, and the Rev. Sam Dessordi Leite became senior priest in charge of St. Stephen’s and Misa Alegría, now constituted as a multicultural, bilingual parish. The parish still holds English language services on Sunday mornings, and Misa Alegría continues to meet on Sunday evenings, but parish governance has been unified, and major feasts days are marked with bilingual services and events.

“When they offered me the job, one of the things they made clear is that they were looking for leadership who would help the communities come together,” says Dessordi Leite, who came to St. Stephen’s from the Diocese of California. “And it is not about a melting pot, it is not about blending in. It’s about unity without losing identity.”

The distinctive identity of Misa Alegría was shaped by the challenging circumstances many of its members faced in making a life for themselves in the United States, and the gifts that clergy and lay people drew upon in responding to those challenges in their daily lives.

“My pastoral work was not primarily taking communion to those who are sick or going to pray with people,” Goodwin says. “It was going to advocate for people. It might have to do with health insurance, or being there to talk with the doctors and making sure that this person is not forgotten and is able to make decisions. The same thing can happen with schools. How do you make sure that your child is not overlooked or determined to be slow because their English development lags behind others? It is advocacy in immigration, housing, juvenile problems with the law and all manner of helping folks navigate complicated new social systems.”

In addition to helping members of the congregation with these emotionally fraught encounters with a variety of bureaucracies, Goodwin thought it was essential to give English-speaking members of St. Stephen’s and of the diocese a deeper understanding of what the lives that members of Misa Alegría led, both before and after arriving in the United States.

In the winter of 2015, she organized a book discussion group that included members of Misa Alegría and the mission committee at Church of the Redeemer in Bethesda where she had been a seminarian. The group read “Enrique’s Journey,” by Sonia Nazario, a book based on a Pulitzer Prize-winning article that told the story of a young Honduran boy’s harrowing journey to find his mother who had migrated to the United States.

In a story for the diocesan website, Goodwin wrote that the groups began stiffly but eventually opened up to one another. “We used the book as a point of departure for sharing our own stories. It’s not often that we privileged North Americans have the opportunity to know those who so often make our lives so much easier by their labor and toil. Suddenly people who lives are too often invisible became real. We were amazed by the resilience and valor exemplified in their stories. trying to make their stories real,” she says now.

Resilience, creativity and the depth of members’ faith are on display each Sunday night as the community gathers for Eucharist at 5:15 p. m.

“Misa is about joy. Alegría means joy and music is at the heart of it,” Goodwin says. “Our musician, Cruz Aguilar, is the ‘joy master.’ He has a way of making every occasion special. People sing with gusto and often respond and participate in sermons. So it’s a high energy service.”

The decision at St. Stephen’s to function as one parish, rather than two congregations that share space but function separately is part of an emerging trend in the Episcopal Church in which Spanish and English speakers interact more frequently, attend services in each other’s language and look for new ways to grow together and share their faith and lives with one another.

The trend is abetted by demographic change. Immigrants who came to the United States as children learned English growing up. As young adults, most speak primarily English in their professional lives and are raising children who also speak primarily English. Their desire to maintain, or in some instances reestablish cultural ties, however, is strong.

Laura Stump, who attends both English and Spanish language services at St. Stephen’s, says young English-speaking Latinos from the parish’s Columbia Heights neighborhood are among the fastest growing segments of the parish. “They are interested in cross-cultural experiences,” she says, and she and her fiancé, Phil Kennedy, chose the parish “specifically for this dynamic.”

“We do a lot of Easter and Holy Week services and they are all neatly integrated bilingual services,” Stump says. “The Easter Vigil is not just bilingual, it’s this really beautiful bits of acting and different forms of art that aren’t spoken, and it actually flows back and forth seamlessly.”

The lack of a common language presents a challenge for the community, but not an unsurmountable one, Dessordi Leite says. “We need to stop thinking of language as a problem, but something that empowers us because then you can connect with more people in different ways,” he says.  “If people say they are not fully comfortable, that isn’t necessarily a problem. There is a side to feeling uncomfortable that tells us there are other ways of seeing things that shows us the gift of being diverse.”

Conesds agrees. “I don’t feel comfortable in the bilingual services,” she says. “But I like them.”

The calendar provides opportunities not only for celebration, but for instruction, and Dessordi Leite says he will make the most of them. Next month he plans to offer workshops on Halloween, All Saints Day, Dia de los Muertos (the Day of the Dead) and All Souls Day. In a parish that encompasses most North and Central Americans cultures and a few South American ones as well, not everyone observes these celebrations and commemorations in the same way—or observes them at all. “What is really neat is to observe how the groups came together and read that experience and work together,” Dessordi Leite says.

Goodwin is happy about what she sees transpiring at St. Stephen’s. “I think Sam is in a position to help them grow, to help the entire community move forward under one vision,” she says.

Her experiences at Misa Alegría, she says, have shaped her ministry. “I learned that the joy of the Lord is contagious,” she says. “And I love our people and the joy they bring to their faith. I think our Episcopal Church could benefit so much from this joy and love of God that is deeply sewn in their hearts. And when you encourage that joy to burst forth and to spill over, it can revitalize congregations.” 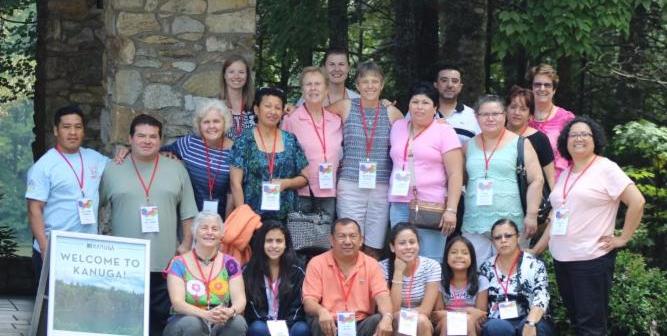 The Rev. Vidal Rivas and  Iglesia San Mateo in Hyattsville have received the inaugural Cast the Nets award for digital evangelism from the Office of Latino and Hispanic Ministry of the Episcopal Church.
The award was presented at the Nuevo Amanacer conference that concluded today at the Kanuga Conference Center in Hendersonville, North Carolina. Some 20 members of the diocese joined Bishop Mariann Edgar Budde, the Rev. Sarabeth Goodwin, transitional Latino minister, and Araceli Ma, the diocese Latino communications specialist, at the conference, which is held every two years.
San Mateo was recognized for its “use of social media in pastoral work in promoting discipleship and empowering lay people in the use of new technologies in order to spread the Gospel and to promote a culture of respect, dialog and friendship.”
The communications team at San Mateo developed Radio San Mateo, a 24 hour online broadcast, after attending E-formation, a conference on digital ministry held annually at Virginia Theological Seminary. The station airs Sunday services, Rivas’ daily readings and reflections, music and interviews.
“We wanted to recognize San Mateo’s creativity and innovation in reaching out beyond their church,” said the Rev. Anthony Guillén, the Episcopal Church’s missioner for Latino and Hispanic ministries. “Radio is a great way to connect with Latinos, so this project is an important evangelism experiment.”
Rivas said San Mateo is exploring ways to involve the diocese’s six other Spanish-speaking congregations in the project.
“Lots of creativity and long hours of dedicated work have gone into this,” Goodwin said. “People from our region and several countries tune in to hear the Sunday transmission and the daily reflections.”
The diocese’s delegation to Nuevo Amanacer travelled to North Carolina by bus with members of the Diocese of Virginia, a group of 45 in all. At the conference they attended workshops, worshipped and sang and heard speakers from the Episcopal Church and the Evangelical Lutheran Church in America. The two churches sponsored the conference together this year for the first time.

“It was a time of renewal,” Goodwin said. “We will be returning energized and empowered for ministry.”